Near our office in Shockoe Bottom is the "First Jewish Cemetery in Virginia," also known as the Franklin Street Burial Grounds. I had grown accustomed to seeing the somewhat enigmatic concrete walled enclosure, surrounded by an empty lot used for parking. Suddenly, the cemetery became surrounded on three sides by a five story apartment building, completely changing the presence of the place. 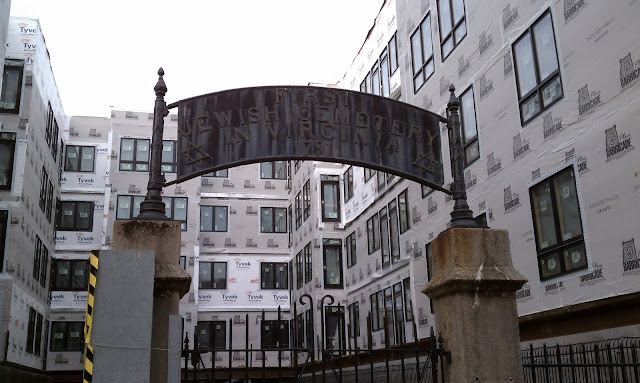 Granted, the cemetery has a decidedly neglected air and apparently has suffered from that condition for many years, interrupted by sporadic consecration and re-consecration ceremonies. This led me to consider how the living and the dead may coexist within urban environments, the former being dynamic forces for change and the latter being, well, static. I confess that my first reaction to the cemetery's engulfment was to recoil from what I perceived to be a lack of respect for sacred ground. However, after reflection, the mere close coexistence of housing for the living and dead may, in fact, be an expected condition for an urban environment. Perhaps there is even value to have the legacy of memory at close hand. 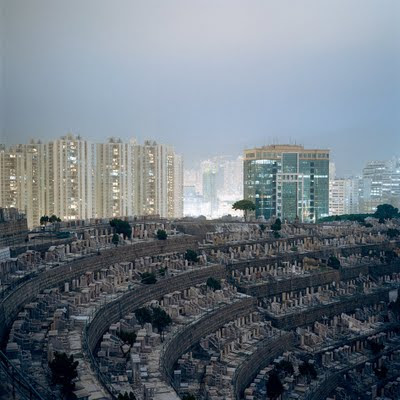 Photo from The Daily Undertaker
I was reminded of the cemeteries of Hong Kong, where the price of real estate is among the highest in the world. These places of burial and remembrance match the urban intensity of their neighboring structures for the living. The grave sites are frequently built with permanent facilities for picnics - tables and benches - where family members may share a meal of ritual memory.
It is probably fair to say that in today's American culture, the rituals of remembrance are largely fleeting and singular in nature. My personal experience with funerals has been marked by the singular ceremony, followed by the internment of the body in a pastoral setting, never to be visited again - a ceremony for forgetting. Is this how it should be? Perhaps ready access to real places of memory, inhabited by the concrete reminders of our personal past, is a healthy part of living. Perhaps I should spend more time in cemeteries and, where it is possible, visit the markers of my own family's history.
So, I find myself growing philosophical about the cohabitation of the living and the dead at the Franklin Street Burial Ground. Perhaps there is value in having one's bedroom window look upon a piece of enigmatic history.
P.s. Somewhere in this train of thought is a city from Italo Calvino.
author: Andrew Moore at 11:59 AM