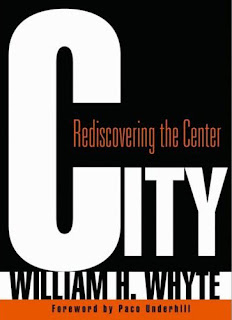 A good companion to Jane Jacobs' seminal text Death and Life of Great American Cities, William Whyte's book City: Rediscovering the Center reflects Whyte's careful research on the way people use urban spaces. Although Jacobs' work is full of wonderful observations of urban life, they are largely anecdotal and sometimes questionable as a base for generalizations. Whyte's premise is that urban spaces are used by people in predictable ways and that subtle differences in design can have huge impacts on behavior. Thus, he observed spaces for periods of time, recording his observations with stop-action film and notation and the result is a compelling argument for deliberateness in the design of urban spaces.
Whyte's work was initiated through a study commissioned by New York City to examine the effectiveness of urban amenities installed as part of commercial developments, the result of incentives (such as increased allowable building area or height) given to developers in exchange for civic space. Whyte suspected that although the developers were meeting the letter of the requirements for these "amenities," the resulting spaces were not meeting the intended purpose due to thoughtless and ill-informed design. His research proved his suspicions accurate and his work resulted in revisions to the prescribed requirements.
author: Andrew Moore at 10:27 AM