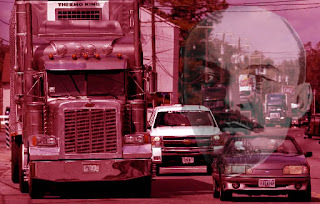 
I was particularly taken by the idea of "road diets" to return space back to the people who live in the city, and devote less to cars zooming through.


Then I had to read the comments.


There was a lot of noise about her failure to mention the term "property rights". Please, don't prattle on about property rights when defending the commie, social engineering experiment known as our road system. That whole enterprise is nothing but a subsidy - a means of socializing the costs of my daily trip to work.
Where did the land come from that the roads are built on - was it just laying vacant until some entrepreneur had the idea of putting a road there? Of course not - people were using it until Big Brother acquired it for "the people's" better purposes.


And lets not forget the costs - call them taxes - imposed on people who have to live with these roads ripping through their neighborhoods - foul air in their lungs, death and injury, the (apparent) need to buy a car and increasingly expensive fuel. Don't get me started on the constant need for maintenance.


It's as if a car was just a tiny bubble of private property floating down a big red river of socialism.
author: John Spain at 5:58 AM