The Children are Coming 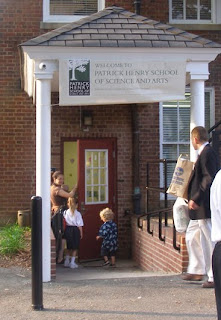 I am sitting here accompanied by the flash of a safety strobe on a news van's antenna. Something big is going on accross the street. Richmond's first (hopefully of many to come) charter school is opening its doors this morning. The Patrick Henry School of Science and Art is the fruit of the labors of a dedicated band of citizens - parents, neighbors and educators - who wanted to see a different model for public education, and to see a beautiful early 20th century school building, with direct access to historic and verdant Forest Hill Park and out to the James River, returned to its purpose as an elementary school. Not condos, not an abandoned shamble. The school is opening in a temporary home; it is actually quite an ideal set up. The school will be in the basement of the Woodland Heights Baptist Church, where the church's adult bible school classrooms are, patiently waiting empty on the weekdays for Sunday mornings. The school, of course could use some empty classrooms on weekdays, at least until its permanent home in the Patrick Henry school building is ready. The school is different because, while recieving some funding from the Richmond Public School System, which is ultimately funded by the citizens, the school is not controlled by that system. Instead engaged citizens, who pay for and send their children to the schools, will have direction over it (within performance and safety limits overseen by RPS.) The model allows for any number of experiments in size, curriculum, focus; hopefully more will come - already in Richmond there is another charter school following in Patrick Henry's footsteps, and the governor's active interest in helping charter schools is due in no small part I believe to his awareness of (including visits to) PHSSA. A big part of the PHSSA model is in fact civic engagement - what gave the school birth in the first place. There is a requirement for volunteer work on behalf of parents - not intended as an onerous burden, but to involve the parents with the school and its neighborhood and city. It is no secret that an actively engaged parent network is crucial to a schools success, just as an actively engaged citizenry is crucial to a city's success. Congratulations to all involved in the Patrick Henry effort on this historic day.
author: John Spain at 2:51 AM