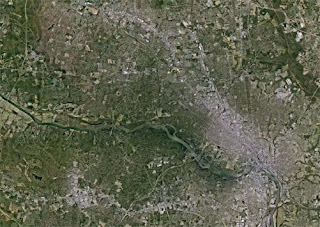 A Beautiful Saturday in Raleigh, NC – the first one in quite some time to bring a hint of spring; couldn’t I find anything better to do than spend the daylight hours in a darkened room in Raleigh’s impressive new convention center, listening to a succession of presentations on urban design?

To some extent, the program was an exercise in rebranding – ideas long trumpeted in the sustainable design movement (transit oriented development, urban agriculture, walkable cities, etc.) were recast in terms of value in today’s economic Hard Times. But there was value and clarity to this new conceptualization, and for me the notion of an urban system’s resiliency, or capacity to adapt to new conditions as it was defined by one speaker, was compelling.

Several themes emerged for me throughout the day. First was the need for openness, clarity and even honesty from the inception of any project about the nature of the local situation. The current Hard Times and collapsing, an-urban structure were largely the result of policy and finance decisions not grounded in sound analysis, but too often chasing an attractive vision with cheap money. McDuffie Nichols, Economics Principal at AECOM, suggested that clearing out this bad investment will take at least the next 5 to 10 years, and that will still leave the physical detritus – abandoned strip malls, uncounted square miles of pavement and a hyper extended, costly infrastructure. His suggestion was to analyze the economic milieu of a place even before the site analysis, and definitely before drawing out the vision of a project; grounding the vision in reality.

A description of projects for resilient cities might be as follows: smaller scale, locally specific, diverse, and connected. There is currently a nationwide (or greater) model for development of moving outward to cheaper land (ignoring or subsidizing the unseen costs of getting there,) until the people catch up, land becomes more expensive, and outward pressure is felt again. The cost of the infrastructure to get out there is subsidized – dispersed until the people paying it don’t notice. Banks have been supportive of this model because of a history of success (narrowly calculated.) This model has collapsed, and banks are no longer so interested. But according to Nichols, banks are not in the business of searching for new models- he suggests compiling a set of successful precedent case studies to bring to the banks when looking to finance different types of projects. Several presenters mentioned the necessity of bringing an increasing number of stakeholders in early, and for the duration of project design, with the designer’s role to facilitate these discussions with drawing tools present to discover the vision of the project.

Third there was discussion about what these places might be like. Dean of the College of Design Marvin Malecha reminded that “architecture begins with the measure of the first human step.” That should indicate the scale of how we develop our cities. NY City’s Alexandros Washburn pointed out that there is really nothing new about all this – the Greeks had found an aesthetic language to represent civic virtues in their built environment, and that was what we are seeking to do. The virtues he pointed to were all timeless: Prudence, Thrift and Creativity. These he correlated to design activities of Adaptation, Mitigation and Generation, what he spoke of as the principles of design grounded in Urbanism and Ecology.
In his keynotes address, Architect, former Mayor of Charlottesville, and most recently Director of Design for the NEA Maurice Cox spoke of the need for the design community to engage with the politics of crafting our cities, and to inculcate an engagement on the part of the citizens. This was a necessity, he felt, to bring about “design excellence” in our places. The afternoon was capped by a Q& A session with four Triangle area journalists – the gist of which was that the ideas presented would “go over with a resounding thud,” if presented that way to the general public. That leaves open ended Mayor Cox’s challenge to engage the citizenry, which he called “creating a constituency for design excellence.” It is incumbent upon designers to find the language, both visual and verbal to make these ideas real to the citizens, and also to find the will to engage with the people on their own level, and where they live.
author: John Spain at 10:50 AM